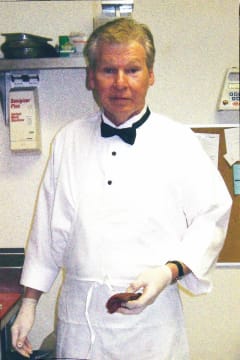 Albert “Harry” Barnjum Jr. age 73, of Hendersonville, N.C. and originally from Jacksonville, Florida passed away peacefully from cancer on the night of Wednesday April 06, 2022, at Pardee Memorial Hospital in Hendersonville, N.C. His wife of 29 years Lynn was by his side. Harry was born on September 24, 1948. He was the son of the late Albert Harry Barnjum Sr. and Irene Taylor Barnjum of Jacksonville, Florida. In addition to Harry’s parents, he is preceded in death by his sister, Bonnie B. Hughes; son, Jamie Barnjum; and daughter, Jackie Barnjum.

He is survived by his wife, Lynn Barnjum; son Josh (Katie); three granddaughters, Emma, Roxanne and Dylan; daughter, Kelly; and one grandson, Rhett. He leaves with much love his brother, Bruce Barnjum (Debbie) and many nieces and nephews.

Harry’s career started in restaurant management. He grew up working in his father’s barbeque restaurants in Jacksonville, Florida in the 50’s and 60’s. In the late 60’s to early 70’s Harry served in the Army National Guard. When his service was over he decided to switch careers. He entered college and earned his degree in Data Processing. Harry went on to work for Winn-Dixie Stores working his way up to Data Processing Manager in the late 70’s and 80’s. In 1990 Harry and his wife Lynn owned and operated their own successful barbeque restaurant in Port St. Lucie, Florida for five years. After selling their restaurant in 1995, Harry and his family moved to Hendersonville, N.C. and Harry went to work for Hendersonville Country Club. He was the Grill Manager there for 23 years until his retirement in 2018. Known as Mister B. by members and staff, Harry's familiar face will be missed at the club and in the town of Hendersonville.

Funeral services for Harry Barnjum will be private by request of the family.