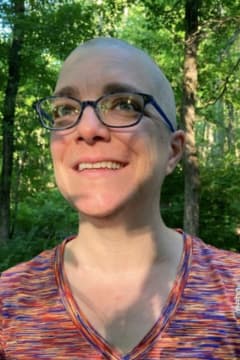 A light to all those who knew her, Barbara Louise Gulick was born November 29, 1975, to Denny and Frances Gulick of College Park, Maryland. She died at home peacefully in her sleep in Arden, NC, on April 17 after living with glioblastoma for almost four years.

Excelling at most anything she put her mind to, Barbara was a standout oboist and swimmer in young adulthood and at Eleanor Roosevelt High School in Greenbelt, Maryland. After graduating from ERHS in 1993, Barbara took her originality and enthusiasm for life and adventure to the University of Virginia, where she majored in environmental science and graduated in 1997. Shortly after graduation, Barbara enlisted in the Peace Corps, where she worked first as an environmental education volunteer and then later as Peace Corps staff. It was during this time that she met Jose Gonzalez. The two married—Barbara wearing a red wedding dress—in 2003. On January 8, 2008, Barbara gave birth to Sofia Esther Gonzalez-Gulick, which was one of the greatest adventures of her life, especially after she and Jose divorced in 2009 and Barbara became a single mom.

In everything Barbara did and accomplished, Sofia came first and was often the inspiration for the things she did. She was a wonderful role model of a strong, caring, and fun-loving mother, advocate, and woman.

Gifted with the talent of learning and understanding languages and cultures, Barbara will be remembered by many students and fellow teachers in many states and countries. Her connections from her service in the Peace Corps stretch from Panama to Africa and around the world. Her ESL teaching positions in Georgia, North Carolina, and other places have touched many students and broadened their futures, exposing them to new ideas and people over the years.

Always finding ways to make change, Barbara started enterprises such as the Newcomers Academy in Habersham County, GA, and Explore More (Explore’ Mas) YouTube science station for instruction in home experiments in Spanish and in English, once again expanding her students’ (as well as her daughter’s) world.

As with every struggle in life, Barbara made something good out of her glioblastoma diagnosis. She became a mentor for Optune, an FDA-approved treatment she used for almost two years that creates electric fields that disrupt cancer cell division. Barbara was also a supporter of and fundraiser for Inheritance of Hope, a nonprofit that supports young families facing the loss of a parent. In 2020, Barbara and Sofia traveled together to New York City to explore the city and meet other IoH families, and, this spring, with the help of a college friend, published a book of poetry and paintings (Barbara’s) and photos (Sofia’s) that raises money for the organization. Buy the book, Golden Repair, by clicking the tab "To Purchase Barbara's book".

Barbara is survived by her daughter Sofia, her parents Denny and Frances Gulick (of College Park, Maryland), sister Sharon Gulick (Mexico City, Mexico), brother and sister-in-law David and Emily Gulick (Exeter, New Hampshire), and nieces Clara and Elly Gulick. In lieu of flowers, please consider a donation to Inheritance of Hope or contributing to a "Scholarship fund for Sofia Esther Gonzalez-Gulick" in memory of Barbara (by clicking on the corresponding tab to the left).