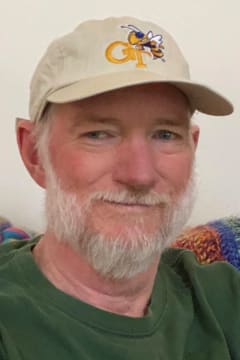 Frank Rowland Sawyer, age 66, passed away in his home in Fletcher, North Carolina on January 1, 2022. He had been optimistically and determinedly battling pancreatic cancer since his diagnosis, Christmas of 2020.

Frank was born June 2, 1955 in Casablanca, Morocco, the youngest child of William Paul and Nell Rowland Sawyer. William’s Air Force career brought the family back to the States when Frank was 9, and after time in Texas and Nebraska they settled in Atlanta in the early 1970s. After high school Frank moved to New Orleans and then signed up for a stint in the Army. His service was cut short due to a family hardship discharge and he found himself back in Atlanta.

Frank took advantage of the GI Bill to complete his education, eventually transferring into Georgia Institute of Technology, where he graduated with a Bachelor of Electrical Engineering with High Honors. He stayed on at Tech as research faculty for 12 years, before following a group of colleagues first to Vertex-RSI and then to ViaSat Inc. He tried sales for three years with Orbit CS, but was anxious to get back to engineering. In 2017 he moved his family to Asheville to join those same colleagues at AvL Technologies, where he was Director of Corporate Account Management and Business Development.

Frank’s faith was of primary importance to him since he became a Christian in his late teens. He and his wife Belinda met while attending Intown Community Church in Atlanta. From 2000 until their relocation to Asheville the family attended Cornerstone Bible Church in Lilburn, Georgia. Frank quickly became a regular providing technical assistance in the sound booth and he took great pleasure in training young tech team members.

Frank had many interests and hobbies over the years, the most enduring being music, photography and his endless soft spot for animals. He enjoyed target shooting and became a certified NRA instructor to teach Boy Scouts about gun safety and skills. His preferred exercise was running and he was a 26-year volunteer with the Atlanta Track Club. In 2018 Frank and his two youngest children earned their black belts in Tae Kwon Do together, an achievement that was a source of great pride for him. His failing health kept him from rekindling his passion for motorcycles; he had picked out the Harley that would be his reward should his prognosis change.

Frank is survived by his wife Belinda and their three children, Elizabeth, Miriam and Aaron; his eldest children Michelle Pratt and David Sawyer, their families and their mother, Cindy Gibbons; his brother William Paul Sawyer and his family; and sister Gaye Jones and her family.

Should you wish to make a tribute, please consider a donation to Four Seasons Hospice out of gratitude for the care and assistance they’ve given Frank’s family.

A memorial service will be held 10am on Thursday, February 3, 2022 at Cornerstone Bible Church
869 Cole Dr. SW, Lilburn, GA 30047.
Visitation will be begin at 9am prior to the service.