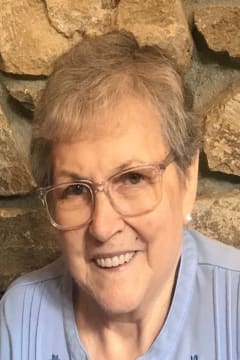 Hilda Norwood Marshall, born Hilda Muirhead Norwood, formerly Hilda Norwood Hardin, aged 87, passed away peacefully on 17 Nov 2021 at The Laurels skilled nursing facility in Hendersonville, NC, where she was recuperating from recent surgery. The cause of death was COVID-19, contracted in the hospital despite being fully vaccinated, and complicated by age and other health issues.

She was “Shorty” to her high-school sweetheart and first husband Stan Hardin, “Hilly” to her parents and childhood friends, which included her second husband Bobby Marshall, “Mama”, “Aunt Hilda”, “Granny”, and “Great-Granny” to a large and loving family.

Celebration of Life services will be held at First United Methodist Church of Brevard at 1:00 PM, Thursday, 2 Dec 2021, and at All Saints Episcopal Church of Concord at 1:00 PM Thursday, 9 Dec 2021. A private interment of her ashes will be held by the family at a later date at Evergreen-Gillespie Cemetery, Brevard.
Memorial donations in lieu of flowers may be made to Sharing House of Transylvania County, https://www.sharinghouse.org. The family would like to thank the community and staff at College Walk for their support and the staff of The Laurels of Hendersonville for their attentive and loving care.

Hilda was born 10 May 1934 at Norwood House in Brevard, NC and named after her Scots grandmother Hilda Muirhead Norwood, who owned and operated the boarding house on Probart Street. Her father Harold Norwood was a chemical engineer employed for many years at Transylvania Tanning Co. before starting his own egg farm. Her mother Rosa Norwood worked at the Brevard DMV tag office. The Norwoods were members of First Baptist Church and Hilda attended Brevard schools, graduating from Brevard High School in 1952. She married Stanford Hardin in Spartanburg, SC, in February 1953. He was the son of the late Dr. Carl Hardin and Lovey Mae Harris Hardin of Brevard. Hilda and Stan Hardin were married for 42 years until widowed in 1995. Stan served in the Navy, then became a production systems maintenance engineer at DuPont Brevard Plant. By 1958, Stan and Hilda had three children, Valerie, Hal, and Ronnie. In 1963, the family moved to Hendersonville. Hilda worked to help make ends meet, most notably as a waitress at Brock’s Drive-In and later as the manager of the Rose’s Department Store cafeteria. They were both active in church, first as members of the Lutheran Church of the Good Shepherd in Brevard, then St. John’s in the Wilderness Episcopal in Flat Rock, where Hilda was the church organist. The family found a long-term church home at First United Methodist Church in Hendersonville, where both she and Stan sang in the choir. Hilda and Stan also loved to sing outside church and were active in local choruses and Little Theater, including memorable productions of Oklahoma! and The Mikado.

Caring and faith were pillars of Hilda’s life. Over the years, she took in several “strays” who needed a safe and loving place to live for a while. As empty nesters, she and Stan moved back to Brevard in 1978 to help care for her aging parents. From 1978-80, they were weekend “relief parents” at the Cope House group home. They took in a foster-son, Randall Breedlove, as there was always extra love in their hearts; he and his wife Victoria are still devoted members of the family. In 1981, Hilda was part of a group of local church congregations that helped start Sharing House, “a source of compassion and crisis assistance for our low-income neighbors in Transylvania County”.

In 1982, Hilda returned to Brevard College, where she had started in 1952, earning an associate degree in 1984. Her mother Rosa died in 1985; her father Harold, in 1987. With Stan approaching retirement, she enrolled in Asbury University in Kentucky to pursue divinity studies, moving to Nicholasville, KY in 1988. Hilda eventually became a Lay Minister and served United Methodist congregations in Nicholasville and Worthville, KY until Stan’s death in April 1995, after which she retired from the ministry and moved back to Brevard. For several years, she was employed as a product sales manager at Grover’s Office Supply. In 2003, Hilda married childhood friend and evangelist Bobby Marshall; they lived together in Brevard until his passing in 2014. She lived for several years in Mt. Pleasant, NC with daughter Valerie, until they moved back to Brevard where they lived together at College Walk until her passing.