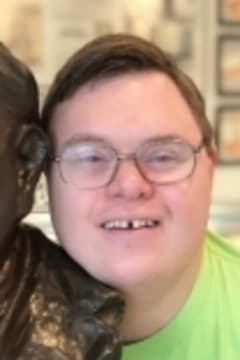 Scott was born on a December afternoon of the 14th, 1980 at Palmetto Baptist Hospital in Columbia, South Carolina. He is the eldest son of Ronald and Margot, and a loving brother to Gregory and Matthew. Scott also embraced the recent additions to the Kuebler family such as Matthew’s husband Patrick and Greg’s wife Mia.

Scott grew up with Down syndrome, but that did not stop him from the many amazing achievements and experiences he had throughout his life. One of Scott’s biggest passions revolved around swimming. At an early age, he and his brothers took swimming lessons together at Columbia College. From there, Scott and his brother’s bonds with swimming together were inseparable and extended to any body of water whether it be community pools, swim teams, lakes, rivers, and also the Atlantic or Pacific oceans. Swimming was a lifelong activity for Scott who swam for JCC (Jewish Community Center) swim team along with his brothers and the Special Olympics swim teams locally, regionally, and nationally. He has collected many medals and ribbons that reflect his many accomplishments and memories with swimming competitively.

Scott was always an active member of his community in a myriad of ways which includes, Special Olympics, Boy Scouts, Aktion Club, the Presbyterian church, and the special needs community. He had a lifelong engagement with his community that allowed him to not only contribute but was also an integral part of his personal growth and development. People from these various communities always remember Scott for his positive cheerful attitude, sense of duty, respect, and willingness to give a hug and smile to those in need.

One of Scott’s biggest accomplishments is earning his Eagle Scout medal in Troop 202 for the BSA (Boy Scouts of America) in 1998. Scott was involved in the Boy Scouts along with his brothers and parents at an early age starting with the Cub Scouts. He learned many things such as friendships, canoeing/kayaking white water rapids, rock climbing, camping, and volunteering outreach activities. After he earned his Eagle Scout rank, his commitment to Scouting continued throughout his life with his involvement in Scout Jamborees (regional and international), Order of Arrow, and Scout Venturing programs. Scott embodied the many core values of Scouting, and will always be remembered for his relentlessly positive attitude, and the friendships he made along the way.

He traveled the world throughout his life for family vacation trips, visits with his brothers who lived across the United States and Asia, and conferences he attended and participated in with his father advocating assistive communication technology for people with disabilities. He also loved collecting flags from his travels and also amassed a diverse collection of flags that new friends have gifted him through the years. For Scott, these flags contain the memories and friendships he made during his travels and various activities he was involved with. His love for being around other people and social activities speaks to his outgoing spirit and loving nature.

Scott also grew up with a strong sense of independence and the ability to overcome challenges on his own. He received a certificate of completion from Spring Valley High School in 2002 and he learned new skills at various jobs throughout his life. In May 2009 he moved to the group home Aldersgate in Orangeburg where he made many new friends with the other residents and support staff. He enjoyed his adult life of independence where he continued his own routines and social activities. He loved tv and movies of all kinds and especially loved animations and superhero characters. He also loved music and cheering for sporting events of any type. He loved going to music concerts and sport game events with his family and friends.

On April 15, 2020, Scott was transported to the Medical University of South Carolina (MUSC with Drs Greenwell and Hess) and was diagnosed with Acute Lymphoblastic Leukemia(ALL). He spent six weeks there getting treatment, receiving support from his parents physically by his side, along with his family and friends from afar. Afterward, he moved back to be with his mother and father in Flat Rock, North Carolina. He continued treatment from Flat Rock, commuting to Bon Secours Cancer Institute (Dr. Crosswell) in Greenville, SC until February 2022. He entered hospice in February with Four Seasons and he enjoyed a few months at home with Mom and Dad and visits from his brothers Greg and Matthew. Scott had respiratory distress on May 26 and ceased breathing at 10:20 PM with his mother and father both by his side, holding his hands.

Special thank you to all the doctors, nurses, and care takers who supported Scott’s journey all the way through.

With kind regards and love,
The Kuebler Family

Scott's Memorial Service will be at First Presbyterian Church of Hendersonville at 610 Yarborough Street on July 8, Friday at 11AM with Pastor Schaap Freeman in person and zoom. 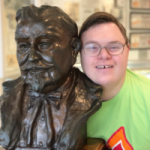 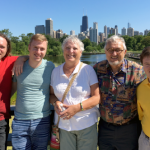 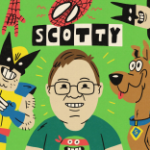